Unemployment is highest among the most recent veterans in US

Discussions has been done about the high unemployment rate among veterans from the post-9/11 wars, but a new US Congressional study offers some fresh insights into the nature of the problem.

The report, citing data from the Bureau of Labor Statistics, shows that the unemployment rate among men and women who served in the military in the aftermath of September 11, 2001 was 10.9 percent in April. Despite their training and experience, many of these veterans are unable to find civilian jobs after leaving active duty. 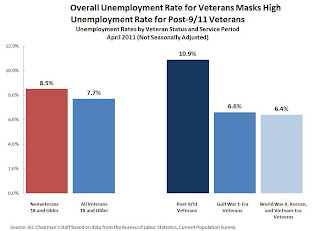 Already, 2.5 million servicemembers have separated since September 2001, and many more will follow in the immediate future. The report says 'Cutting or eliminating essential programs for veterans in the name of deficit reduction would be a disservice to men and women who have made great sacrifices in defense of our country, and a disservice to the nation. Rather, making investments to ensure the existing federal programs are successfully enabling all veterans to transfer the skills they gained in the military to employment in the civilian sector will strengthen the economic security of veterans, their families and the nation'.
at June 06, 2011