Researchers at Japan advanced institute of science and technology (JAIST) have successfully fabrication the suspended graphene nanomesh in a large area by the helium ion beam microscopy. 6nm diameter nanopores were pattern on the 1.2 um long and 500 nm wide suspended graphene uniformly. By systematically controlling the pitch (nanopore’s center to nanopore’s center) from 15 nm to 50 nm, a series of stable graphene nanomesh devices were achieved. This provides a practical way to investigate the intrinsic properties of graphene nanomesh towards the application for gas sensing, phonon engineering, and quantum technology. 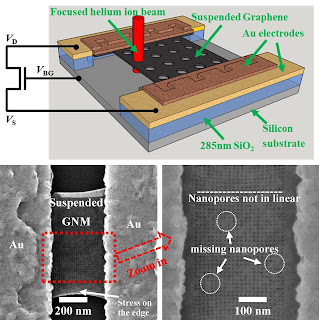 A research team led by Dr Fayong Liu and Professor Hiroshi MIZUTA has demonstrated in collaboration with researchers at the National Institute of Advanced Industrial Science and Technology (AIST) that large area suspended graphene nanomesh is quickly achievable by the helium ion beam microscopy with sub-10 nm nanopore diameter and well-controlled pitches. Comparing to slow speed TEM patterning, the helium ion beam milling technique overcomes the speed limitation, and meanwhile, provides a high imaging resolution. With the initial electrical measurements, it has found that the thermal activation energy of the graphene nanomesh increased exponentially by increasing the porosity of the graphene nanomesh. This immediately provides a new method for bandgap engineering beyond the conventional nanoribbon method. The team plans to continue exploring graphene nanomesh towards the application of phonon engineering.

“Graphene nanomesh is a kind of new ‘brick’ for modern micromachine systems. Theoretically, we can generate many kinds of periodical patterns on the original suspended graphene, which tunes the property of the device to the direction for a special application, in particular nanoscale thermal management” says Prof. Hiroshi Mizuta, the Head of MIZUTA Lab. The MIZUTA lab is currently developing the electrical and thermal properties of graphene-based devices for fundamental physics and potential applications such as gas sensors and thermal rectifier. The aim is to use graphene to build a green world.

Email ThisBlogThis!Share to TwitterShare to FacebookShare to Pinterest
Labels: nanotechnology